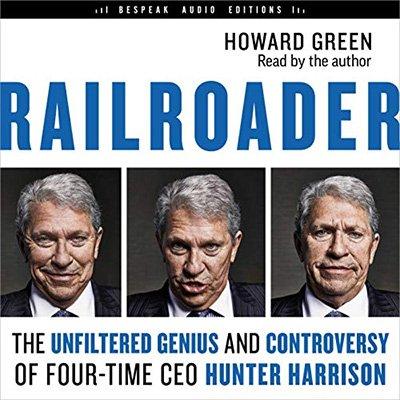 Hunter Harrison, the revolutionary railroader from Memphis, dramatically turned four publicly traded companies into cash machines. Starting as a laborer when he was a wayward teenager, Harrison spent a half century in the rail business and nearly two decades running Illinois Central, Canadian National, Canadian Pacific, and CSX. Never accepting the status quo, Harrison not only renovated established railroads, he forced an industry to shape up. As the preeminent proponent of Precision Scheduled Railroading, Harrison created approximately $50 billion in shareholder value. Charming, intimidating, and not afraid to make enemies, the no-bullshit CEO let nothing get in his way. At the same time, he was a talent scout and coach to thousands and a devoted father and husband for more than 50 years.

Railroader offers insights into running all businesses. Howard Green’s highly personal biography is deeply researched, based on conversations with Harrison over several years. It also includes candid stories from Harrison’s family and colleagues – those who admired him and those who criticized him. Green’s access and decades of experience give him the unparalleled ability to tell the story of this uncompromising leader who both inspired and infuriated.